The story of Faynan Heritage Home

Faynan Heritage Home was established following a request from the Faynan & Gregera community in 2019 to Professor Steven Mithen of the University of Reading UK.  While developing Faynan Museum to attract eco-tourists to Faynan, representatives of the community stated that they wanted support for the development of a business to make handicrafts to sell to tourists. That would be means to secure direct income into families.

Steven applied to the UK Arts & Humanities Research Council for a project entitled ‘From Archaeology to Business in Faynan’ (ABIF). That proposed using artefacts from the Neolithic site of WF16 to inspire products that would be unique to Faynan and hence attractive to tourists – such products would provide memories of their experience in this beautiful corner of Jordan with its remarkable cultural heritage.

The grant was awarded (AHRC award AH/T00777X/1) enabling a partnership between the University of Reading, the University of Petra and Future Pioneers for Empowering Communities (FPEC) to develop the business. FPEC is an NGO devoted to supporting impoverished and vulnerable groups in Jordan and had previous experience of developing small business led by women in other parts of Jordan http://future-pioneers.org/.  FPEC is led by Obayda Humash and appointed Nebras Maslamani and the project manager. Dr Fatima Al-Namari led the project for the University of Petra.

The ABIF project established the ‘Faynan Heritage Women’s Cultural Association’ (FHWCA) with 25 members – five women coming from each of the five tribes in Faynan and Gergara. Training was provided in various aspects of business and marketing. Professional advisers were brought in to advise on the development of products and to provide training in handicraft manufacture to supplement traditional craft skills.

A second grant to support the project was secured when the ‘Our Past, Our Future’ project, that had developed Faynan Museum, was awarded the Newton Prize for Jordan in 2020.  This new grant was awarded by the Department for Business, Energy, and Industrial Strategy (BEIS) in the UK for a project called the ‘Past Empowers the Present’ (PEP). This project enabled the business training to be extended and for a workshop and display area to be commissioned and constructed. It also extended the range of facilities and training to include pottery production, a kitchen for a Bedouin café, and for an online sales platform. As the business developed it became ‘Faynan Hertage Home’.

Developing the business between 2019 and 2022 was challenging. This coincided with the covid-pandemic that not only impeded meetings and training events but also ended tourism in Faynan (and elsewhere in Jordan) for almost two years. In addition to the pandemic a wide range of unexpected difficulties were also faced, most notably access to land. By January 2022, however, the first products were ready for display and sale. On the 10 March, Faynan Heritage Home was opened by Her Excellency Mrs Haifa Najjar, the Minister of Culture for Jordan and Mrs Bridgit Brind OBE, the British Ambassador.

The opening event, however, was just the end of the beginning of the story for Faynan Heritage Home. Having received two years of intensive support and funding from the UK via the project partners, Faynan Heritage Home now has the challenge of becoming an independent and sustainable business. This will mean ensuring that its products maintain their high quality, their distinctiveness to Faynan and their attractiveness to tourists. Enough products will need to be made and sold to cover the operating costs and generate a surplus to provide the income to the women and their families in Gregera and Faynan that was the original purpose of the project. Can that be achieved? 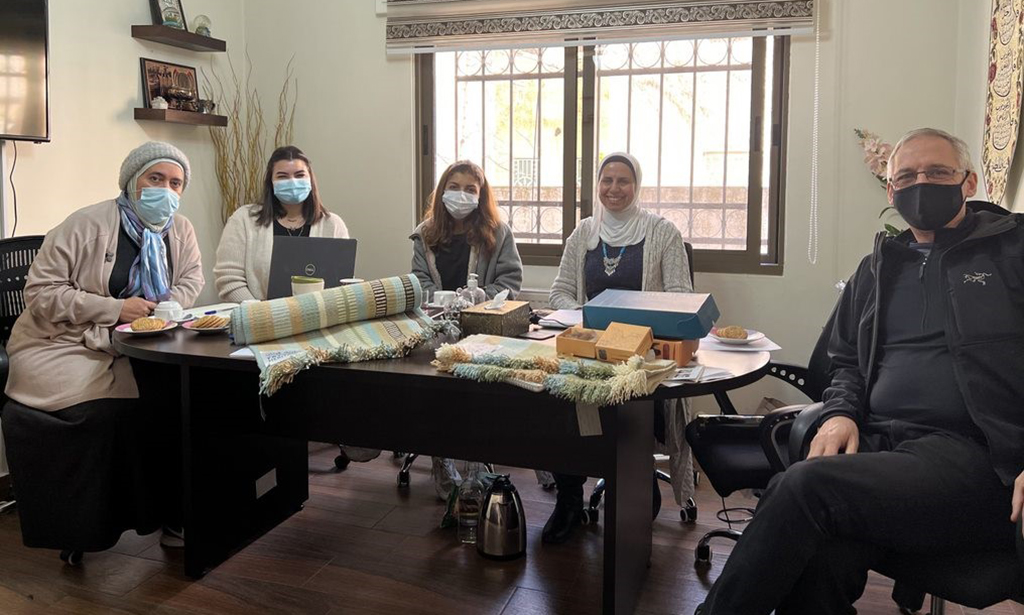 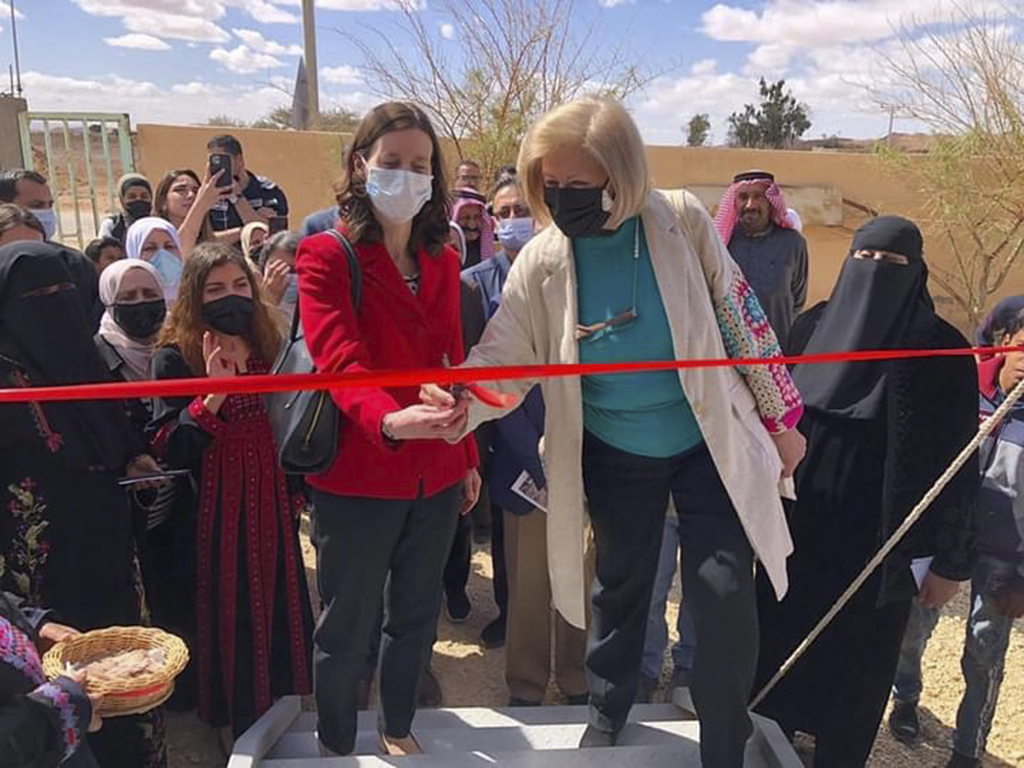 Her Excellency Mrs Haifa Najjar, the Minister of Culture for Jordan and Mrs Bridgit Brind OBE cutting the ribbon to open Faynan Heritage Home on 10 March 2022 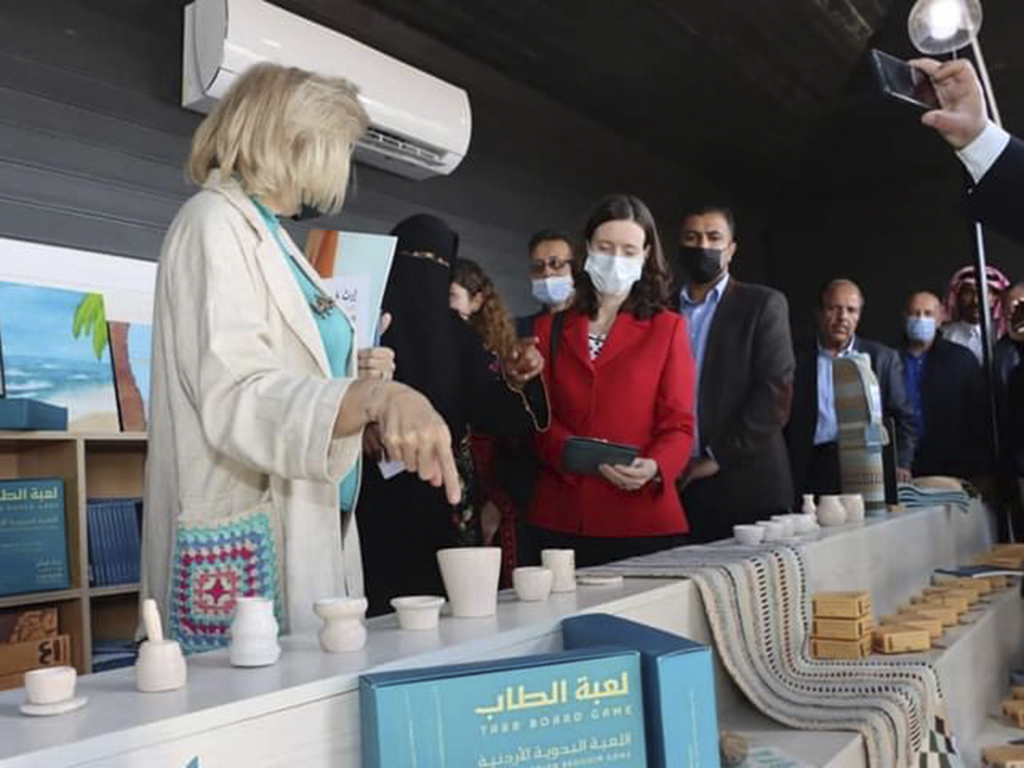 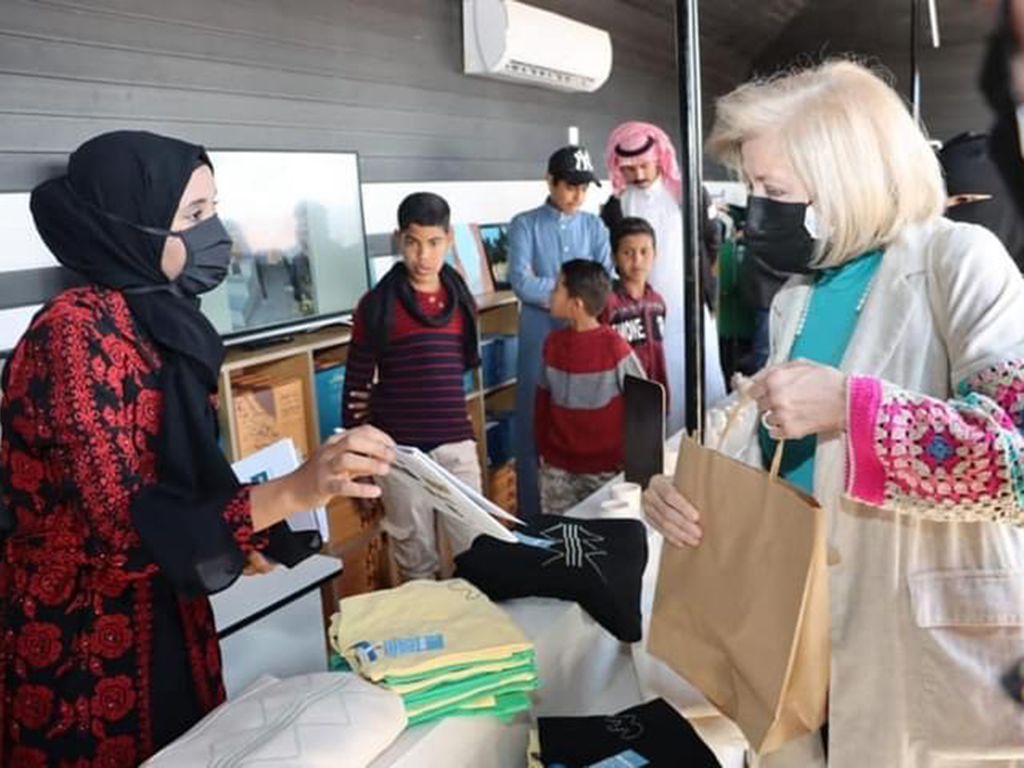 Her Excellency Mrs Haifa Najjar, the Minister of Culture for Jordan and Mrs Bridgit Brind OBE, viewing the products of Faynan Heritage Home on 10 March 2022