Faynan has a great diversity of bird life. This is a consequence of its range of habitats that arise from changes in topography, geology and water availability, which in turn influence the vegetation, fauna and insect life on which the birds depend. Although the habitats blend into each other, five distinct types can be recognised. Each of them provide opportunities for seeing different types of birds: 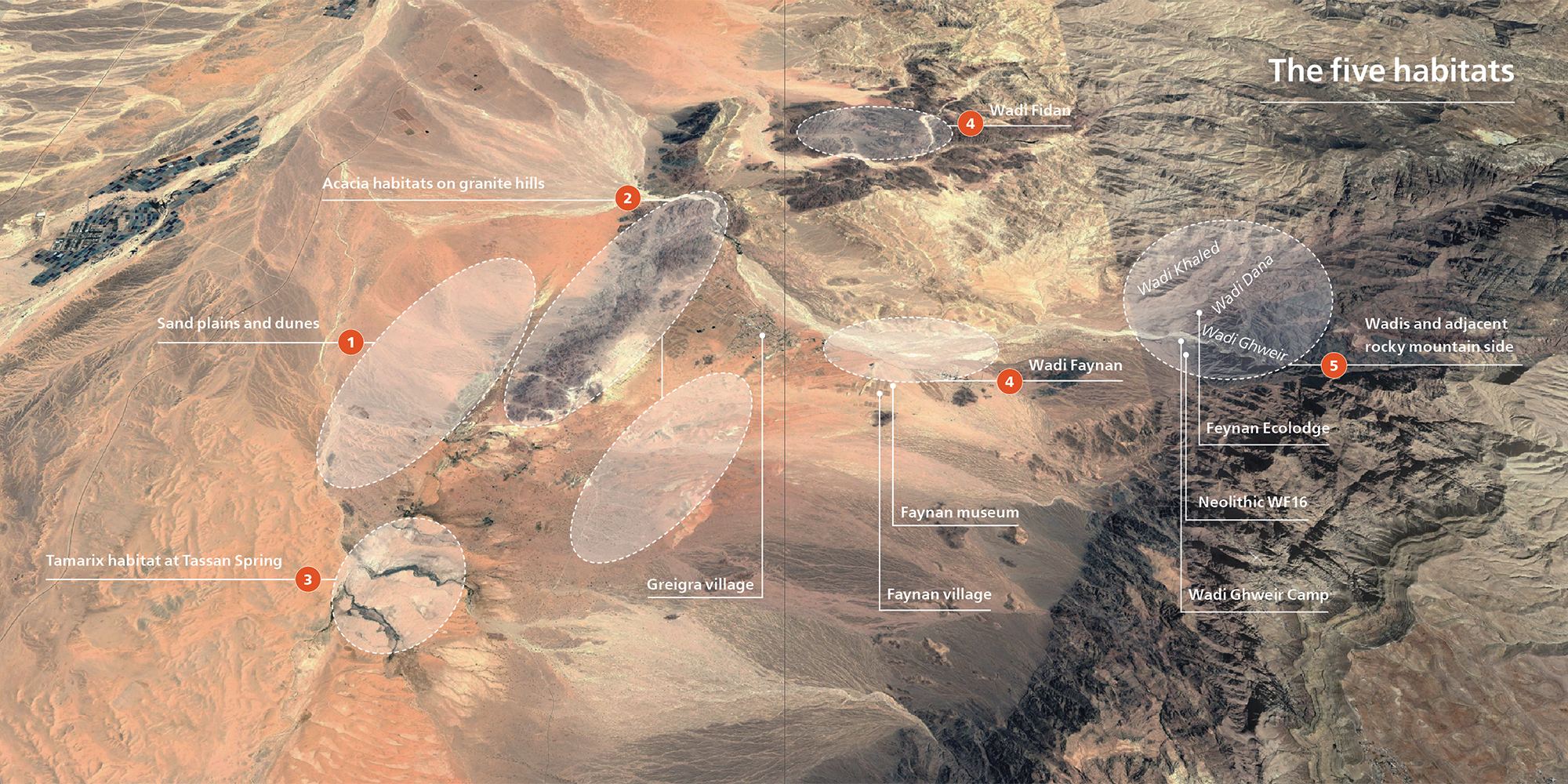 The sand plains are easily accessible from the Greigra road which heads off east from the Dead Sea road known as the Aqaba Highway. The sand is occasionally covered with a thin layer of fine gravel, and has low vegetation cover. A few shallow waterbeds intercept this area and are lined with relatively dense vegetation dominated by the shrub Haloxylum persicum. We recommend a walk of at least 2 km north of the road and along the shallow wadi (Wadi Abu Dubbana) to observe Cream-coloured Cursor, Hoopoe Lark, Temminck’s Lark, Bartailed Lark, Desert Wheatear and possibly Spotted and Crowned Sandgrouse and Dunn’s Lark. Scrub Warbler occurs locally where vegetation is dense. Desert Warbler spends the winter here, preferring the scrub growing along the shallow wadis.

The granite hills just west of Greigra (Jabal Hamrat Fidan) and the acacia woodland near the asphalt/tarmac road leading to Petra (Namala road) are good places to observe Sand Partridge, Little Green Bee-eater, Desert Lark, Great Grey Shrike, Spectacled Bulbul, Palestine Sunbird and Blackstart. The acacias are the favored habitat of Arabian Babblers, and although the Arabian Warbler has been spotted here in the past, it is now considered a rarity in Wadi Araba.

During the spring migration, the acacia trees are often teeming with small migrant warblers, flycatchers and redstarts.

3. Tamarix habitat at the Tassan Spring

Southwest of Greigra lies a small marsh-like habitat formed by fresh-water springs, accessible with a 4WD vehicle from the Namala road. Here, the Tassan and Buerdah springs form a desert oasis surrounded by a sand dune landscape. The Tamarix habitat is home of the rare Nubian Nightjar and also attracts a great variety of passerine migrants that stop over here to rest and feed during the migration seasons.

Much of the shallow wadi has been recently converted to agricultural fields, which nevertheless contains patches of acacias with Little Green Bee-eaters and Arabian Babblers. The presence of water attracts birds of the surrounding rocky hills like Sand Partridge, Desert Lark, Trumpeter Finch and House Bunting. Spur-winged Plovers reside near irrigation ponds. Winter visitors include Mourning Wheatear, Sardinian and Cyprus Warblers, Syrian Serin and in some years the Common Buzzard and Dead Sea Sparrow. The Hooded Wheatear can also be observed at Faynan.

There are three main sites to visit, but these have limited access even with a 4WD vehicle, so long walks are required with a starting point at Faynan: Wadi Dana, Wadi Ghweir (Wadi El-Nakheel) and Wadi Khaled. The scenic, narrow, deep wadis of the rift margin and adjacent rocky mountain slopes have some springs and sections with flowing water supporting a lush vegetation of Oleander, Tamarix and Ziziphus. The edges of Wadi Ghweir are dotted with Moringa shrubs and higher up there is a dense grove of wild palms and a small dense jungle in the wadi bed. The Wadi Khaled is drier and less steep than the two other wadis, but birds of prey like the Griffon Vulture, Bonelli’s Eagle and others are often observed soaring here. The wadis are home of Sand and Chukar Partridges, Desert Tawny Owl, Desert Lark, Blackstart, Hooded, Mourning and White-crowned Wheatears, Scrub Warbler, Fan-tailed Raven, Tristram’s Starling, Trumpeter and Pale Rose Finches and Striolated Bunting.

In winter, Grey Wagtails and possibly Kurdistan Wheatear can be observed, while the Great Tit and Syrian Serin descend from higher elevations. Short-toed Snake-eagle, Sooty Falcon, and Pallid Swift are also among the breeding species. Due to its location along the rift valley north of the Red Sea, the area is of great importance for bird migration and large numbers of soaring birds can be observed along the lower rift margins. 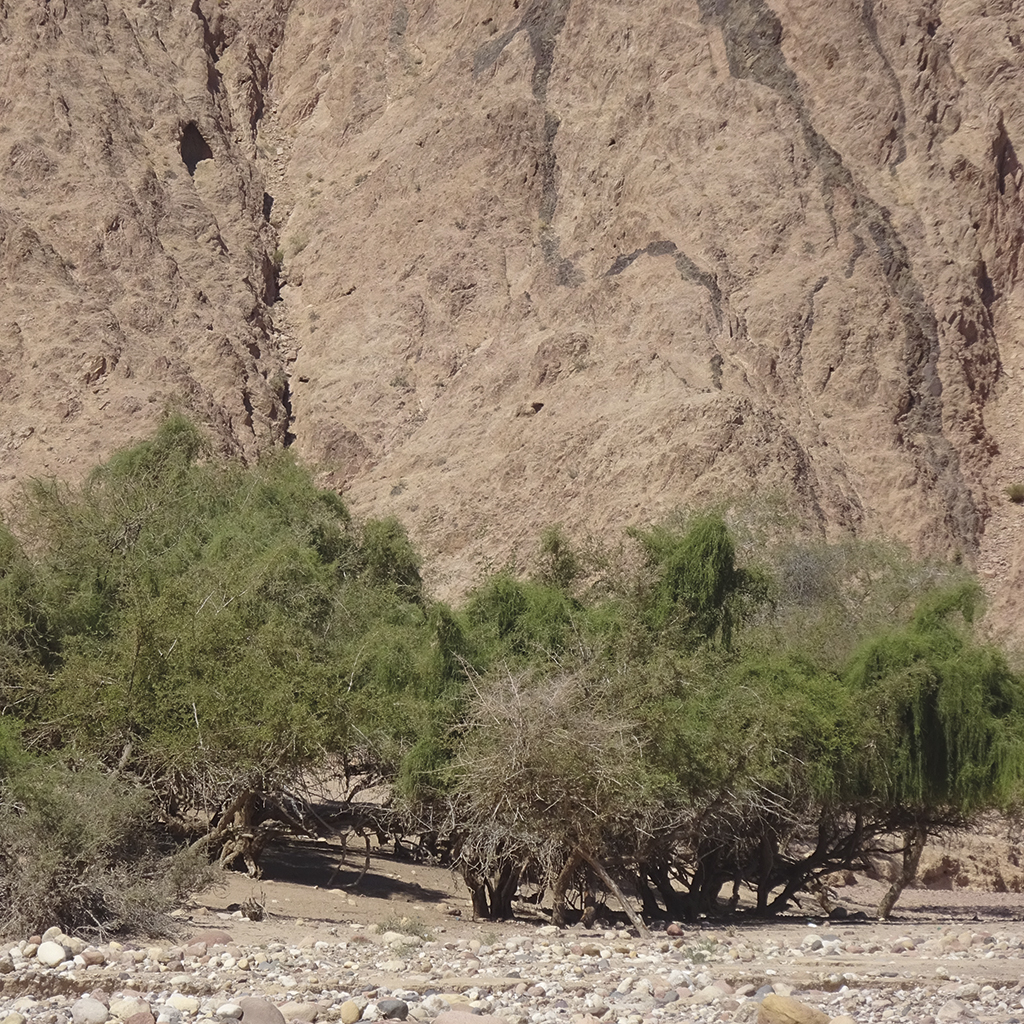